3)Lonely Days
Kufi is a village, and its people so much belive in myths and superstitions. In Kufi widow’s suffer majorly because the people feel their husband’s death wasn’t caused naturally, they always find a way ti blame the deceased wife. Generally, widows are subjected to a new life entirely where loneliness is seen, a life of total self sacrifice for they have to fend for themselves most of the time since their husbands is gone. So many widows will be subjected to so many dispeakable lifestyle or act just to prove their innocence.
Yaremi,Fayoyin,Radeke and Dedewe all suffered maltreatment and deprivations because they are widows,The loss of a loved one is demoralizing on its,adding JAMB RUNS unwarranted punishment to it is simply unreasonable. Just because a hawk perches on the roof of Ajumobi’s house on the day that Ajumobi passes on, The villagers asserts that Yaremi killed her husband.
Dedewe on the other hand was forced to sit with her late husband’s corpse and asked to confess her sins like adultery, jealousy, sin of defamation and disparagment, slander, telling lies and insensitivity to her late husband’s needs JAMB RUNZ 2019
In Fayoyin’s case she us given libation to lick when her husband died (that is the water used to wash his corpse) to purge her of all her sins, it didn’t stop there,her hair was scrapped off.
In Radeke’s case she sang the widow’s traditional song of innocence and lamentation which she in which she affirms her love and devotion for her late husband but the people said its a lie, she was asked to curse the killer of her husband who they believed was her (Radeke).
Widowhood comes with alot of sacrifice, they all had to sacrifice their selves to inhuman treatment to prove they are innocent. Their properties, freedom and happiness will be taken from them. In Yaremi’s case she had to bear her pain and the humiliation. She also had to sell taffeta clothing materials for a living and also goes to the farm with her grandson Woye.
After she refused picking a cap at the cap picking ceremony, the elders of kufi pronounced judgement on her, she is to be avoided like a leper and her husband’s property was taken away from her.Nabteb 2018 LITERATURE Obj & Theory/PROSE Questions & Answers/Expo/Dubs/Runz

Woye: Woye is the son of Segi and grandson of Yaremi of about eight years old. He plays the role of a comforter in the life of his grandmother, Yaremi, when there is nobody to console her. Woye, somehow, fills the vacuum created by the demise of Ajumobi, helping Yaremi in the production, transportation and marketing of taffeta cloth which is regarded as the best in the village. Woye is playful and naturally happy, enjoying the company of goats and dogs. Woye is a bit lazy, but when fired up, he can use his number game as a motivation to do the work he is expected to do. He loves to go to school; therefore, he decides to follow his mother, Segi, back to his fathers village to start schooling, when his mother visits Yaremi. Woyes departure is painful to Yaremi, but she has no choice than to allow her grandson to get education.JAMB QUESTIONS AND ANSWERS 2019 / RUNZ / EXPO / RUNS

Bessie says hi to Bigger when he comes to Ernie’s Kitchen Shack, but she leaves when she sees Jan and Mary.

Bessie welcomes Bigger into her place the day after Bigger killed Mary. She sleeps with Bigger.

When Bigger tells her how Mary is missing and that they could get some money out of the situation, Bessie gets worried. She asks him if he’s done something to that white girl.

She doesn’t really want to have anything to do with the ransom note, but when coerced, she reluctantly becomes a part of it.

Bessie is worried more than ever when Bigger returns later after Mary’s body has been discovered. When Bigger admits he killed Mary after all, Bessie gets worried that he might kill her too.

Worried and nervous and crying, Bessie leaves with Bigger because she feels she has no other option.

In an abandoned building, Bigger rapes Bessie, then kills her, knowing he can’t take her (she’s crying too much) or leave her (she’ll reveal all), he throws her body down an airshaft.

Bessie’s body is presented to the court as part of the evidence against Bigger. 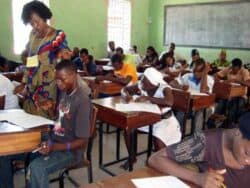